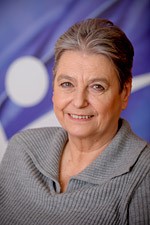 Prof. Ewa Chmielecka is the Professor at the Warsaw School of Economics where she heads the Department of Educational Policy. For 2010-2017 she also was a professor and expert at the Educational Research Institute in Warsaw. She has extensive national and international research experience in the public policy of educational systems, particularly concerning lifelong learning, qualifications frameworks and quality assurance in higher education. Her international research experiences are illustrated by the list of some 100 publications in these fields, as well as her leadership or membership in numerous international research projects and expert groups. She represents Poland in the European Commission’s EQF Advisory Group (2008 – 2018). She was a member of the working team for aligning the Hong Kong QF to the EQF (2014 -2015).  She was the leader of the AG working team on qualifications horizontal comparison (2016-17). She was a co-author of the level descriptors of the Polish Qualifications Framework, as well as co-author of Poland’s self-certification report submitted to the EQF Advisory Group in 2013. She also has been serving on the Croatian, Hungarian and Slovakian Referencing (NQF/EQF) Teams, Twinning project for Macedonia, NQF-IN Erasmus+ project, the Central Asia Education Platform (CAEP) project  and the others.
She was a member and the chair of the Polish Bologna Experts Team (2006 – 2013) as well as a member of the Polish Universities Accreditation Commission (2012 – 2015). She is a chair of the Bologna Team of the Conference of Rectors of Academic Schools of Poland (2017 till now. Her national position in the Polish academic community is reflected by her membership in the Polish Academy of Science Committees: “Poland in United Europe” (2003 – 2006) and “Ethics in Science” (2008 – present). She was awarded the title “Authority of the Year” by the Students’ Parliament of the Republic of Poland in 2009 and the Medal of KEN in 2016.