At the 2022 International Dialogue on Education (ID–E) Conference, representatives of universities in Germany, the United Kingdom, Canada, and the United States gathered at the Canadian Embassy to discuss student mental health and well-being at their respective institutions. German science and education journalist Dr. Jan-Martin Wiarda moderated the panel, and was joined on stage by Professor Harald Baumeister of Universität Ulm and Andrew Winter of The University of Sheffield. Professors Chantal Pharand from the University of Montreal and Ann Marie VanDerZanden from Iowa State University participated virtually.

Isabelle Poupart, Minister and Deputy Head of Mission at the Canadian Embassy, and Dr. Michael Harms, Deputy Secretary General and Head of Berlin Office at the German Academic Exchange Service, both gave introductory remarks to begin the conference. Each explained that the coronavirus pandemic inspired the selection of student mental health as the topic of discussion, highlighting how students’ struggles with isolation and burnout during this period have brought this issue to the fore in German higher education spheres.

“How can and should universities implement measures to foster the health and wellbeing of their students?” Harms asked.

The panel’s ensuing discussion revealed that although decline in student well-being during the pandemic is a shared phenomenon across the four countries, German universities are doing comparatively little to address this crisis. 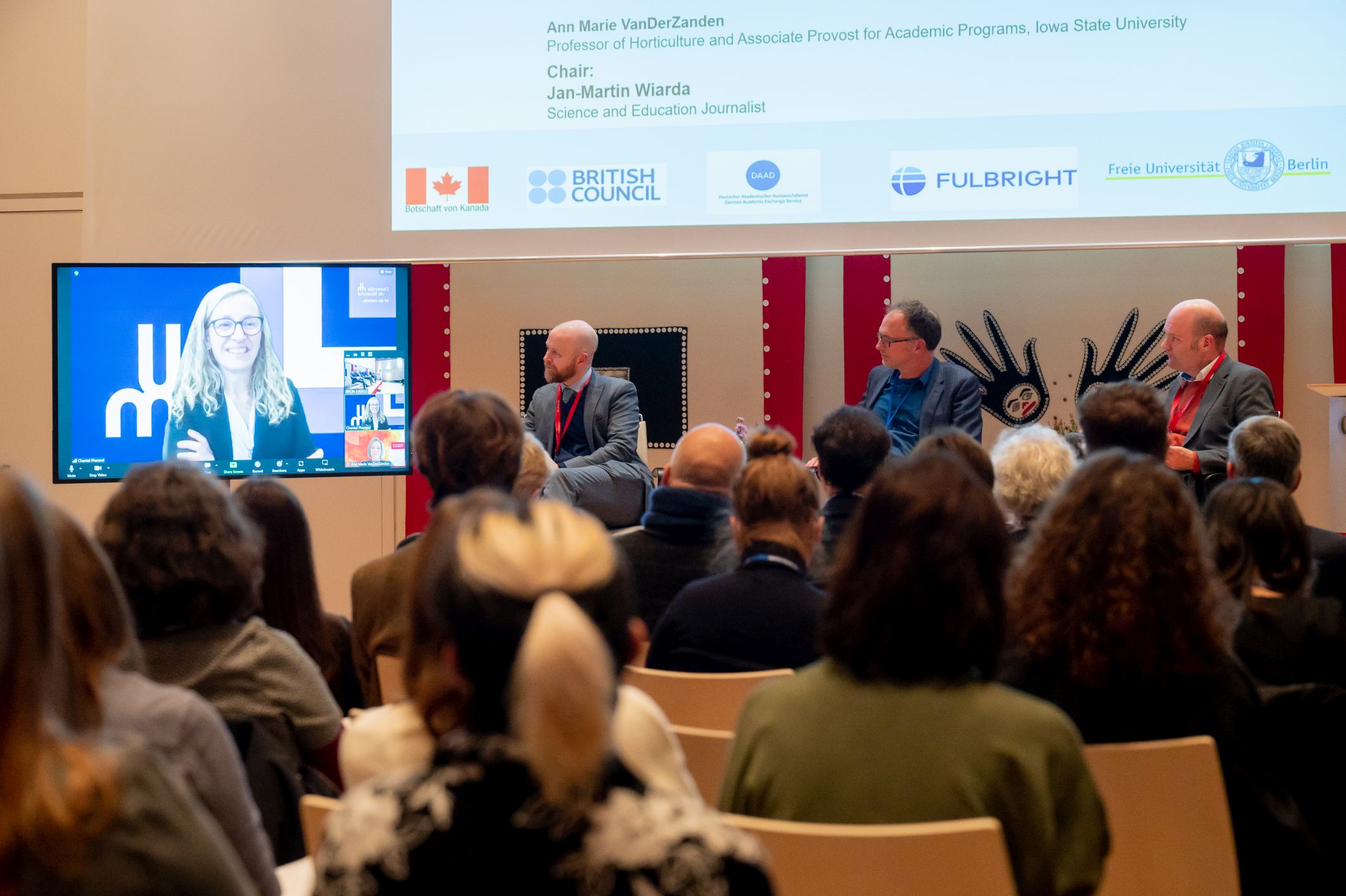 Approaches to student mental health around the world

Harald Baumeister, a Professor of Clinical Psychology and Psychotherapy, explained that from his perspective, the pandemic has had little effect on how German universities approach student mental health. The issue continues to fall outside of most universities’ core focus areas, even as evidence demonstrates that student mental health is a growing problem.

Baumeister worked on a 5-year survey project, Studicare, examining mental health of students in twenty countries. The survey found that about one-third of respondents showed symptoms linked to mental disorders within their first year at university. Germany was among those countries whose students showed higher levels of mental distress. According to Baumeister, more recent analyses have shown that the risk ratio for mental distress increased by 50 to 100 percent during the first two years of the pandemic for students at German universities.

In contrast to Germany, the other panelists explained that student mental health has become more of a priority at their universities, especially since the pandemic began. Andrew Winter, the Director of Student Services at The University of Sheffield, explained that across UK universities, there are more developed support services and structures for students experiencing mental health issues than in Germany.

While emphasizing that the UK is not a utopia, Winter said this trend is indicative of a shift in UK society’s attitude towards mental health, which was much more of a taboo subject in previous decades.

“We have a growing level of disclosure around mental health within the country as a whole, and students as a subset of that,” he explained.

As more and more students have sought mental health services in recent years, universities in the UK devised ways to bolster the services they offer.

This trend only increased with the onset of the pandemic. In response to growing student demand for mental health support during this period, the University of Sheffield put more resources into their mental health services.

The University of Montreal also placed more of a priority on mental health during the pandemic, according to Chantal Pharand, a Professor of Pharmacy and Associate Vice-Rector of Student Affairs, who served on the university’s covid coordination committee. Like students in Germany and the UK, Pharand observed more students in Canada also sought mental health resources during the pandemic.

The provincial government recognized this as well, and stepped forward to provide funding to support more services at universities. The University of Montreal used this funding to hire more psychologists and contract with an external office to see patients.

Student mental health is also a high priority for Iowa State University according to Ann Marie VanDerZanden, Professor of Horticulture and Associate Provost for Academic Programs. VanDerZanden was also the chair of the Academic Continuity Working Group, a taskforce that focused on academic-related responses to the impact of the pandemic.

VanDerZanden explained that a sense of duty informs the university’s approach to mental health.

“At our institution, we understand how central a student’s well-being—their mental health and their physical well-being—is to their academic success, so we have a moral imperative to support them in a way to ensure that they can be successful in their academic endeavors,” she said.

Why has Germany taken a different approach?

Lack of parental involvement in financing higher education is another consequence of Germany’s tuition-free universities. Wiarda posited that because parents in Germany do not pay tuition fees, they might not expect universities to provide their students with mental health services. This contrasts the United States, where parents often pay at least part of their child’s university tuition. VanDerZanden explained that mental health is a major concern among parents, ensuring it remains a priority for the university.

But Baumeister believes the reasons for German universities’ reluctance to prioritize student mental health goes beyond a lack of tuition fees.

He argued that there needs to be a political shift among German universities so that they see it as their duty to provide mental health services, similar to what VanDerZanden described at Iowa State.

“Providing mental health to students… should be a normative setting and a duty of universities,” Baumeister contended. “This is not a minor shift. We are talking about one-third [of students] with mental health issues, one million students per year. That is not something you can [address] by shifting resources a little bit from here to there.” 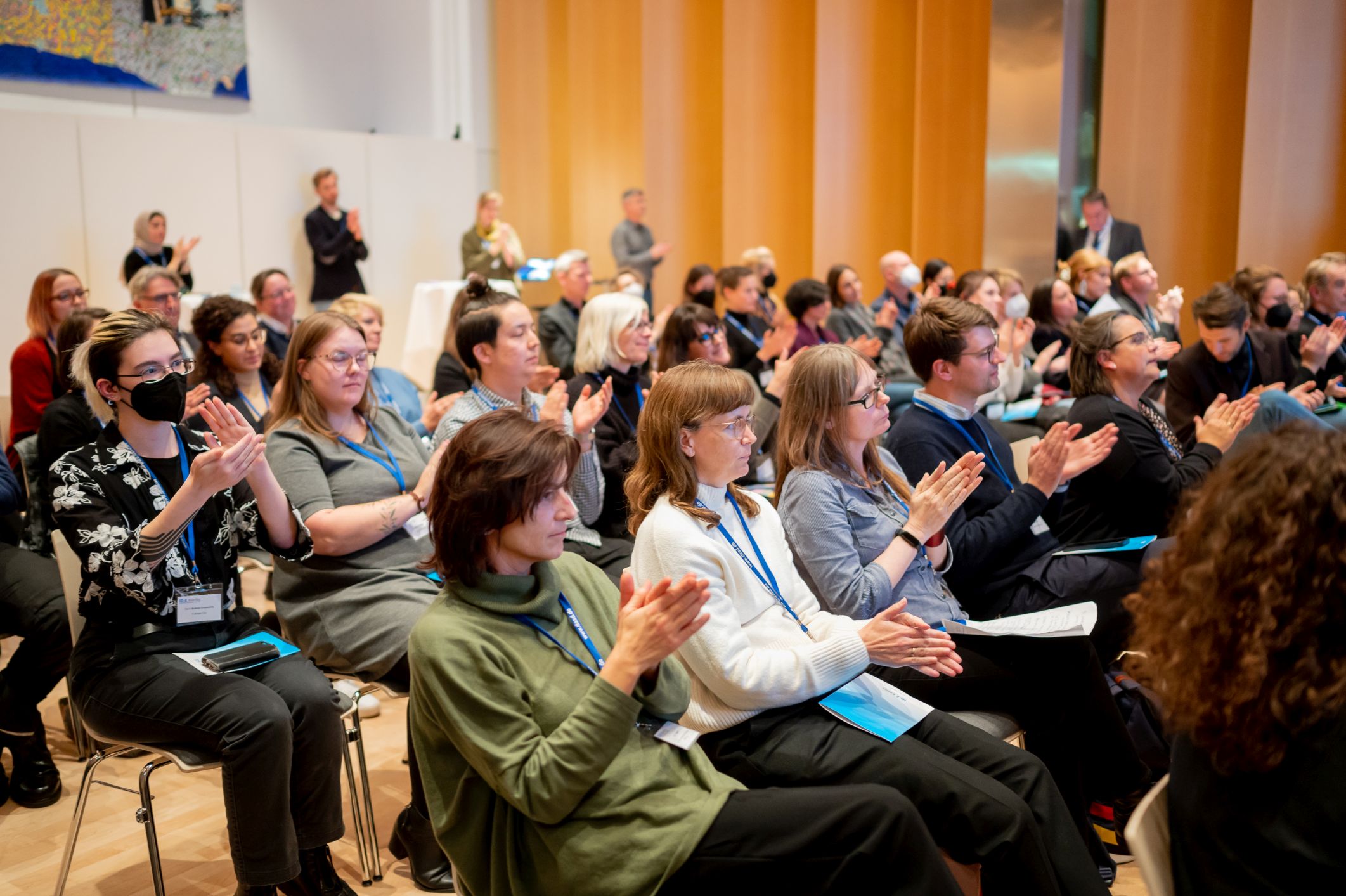 Even with increased resources going towards mental health services, Winter, VanDerZanden, and Pharand explained their universities had to devise strategies to sufficiently cope with the incredibly high demand during the pandemic.

Winter explained that Sheffield implemented a self-referral form for students. Now, students fill out a form that helps them order their thoughts and articulate their feelings before meeting with counselors. In some cases, Winter says, this process de-escalates students to the point where they no longer feel the need for a one-on-one consultation.

“They don’t need the intervention they thought they needed, and they can move to a different service at the non-clinical end or self-help end of our provision, which is helpful in terms of managing demand,” he explained.

The University of Montreal had also developed a system designed to mitigate the need for one-on-one consultations because the demand for such consultations outweighs the resources available.

In what Pharand described as a “triage” session, students meet with a mental health professional, who then determines the best strategy to address that student’s needs, such as one-on-one counseling or group therapy.

VanDerZanden explained that Iowa State has a similar system in which students have an initial conversation with a university counselor, after which point they can choose whether to make a therapy appointment or take part in peer-focused programs, which have been popular during the pandemic.

Beyond providing these reactive services, Winter also emphasized the need for a holistic approach to prevent students from needing to use mental health services in the first place. One way to do this is to instill a sense of belonging in students by helping them build peer and friendship networks.

VanDerZanden concurred with this approach, and pointed towards Iowa State’s Learning Communities program as one way to do this. In this program, first-year students are placed into groups of twenty peers based on their academic interests. This gives them a manageable community in which they can build friendships and combat isolation as they transition to university life.

“It helps students create connections from an academic standpoint, but more importantly, as we are coming out of covid, from a social standpoint,” she said. “All of those skills that the learning communities help our students build will ultimately help those students be more successful, more engaged, and have a more enjoyable experience on campus.” 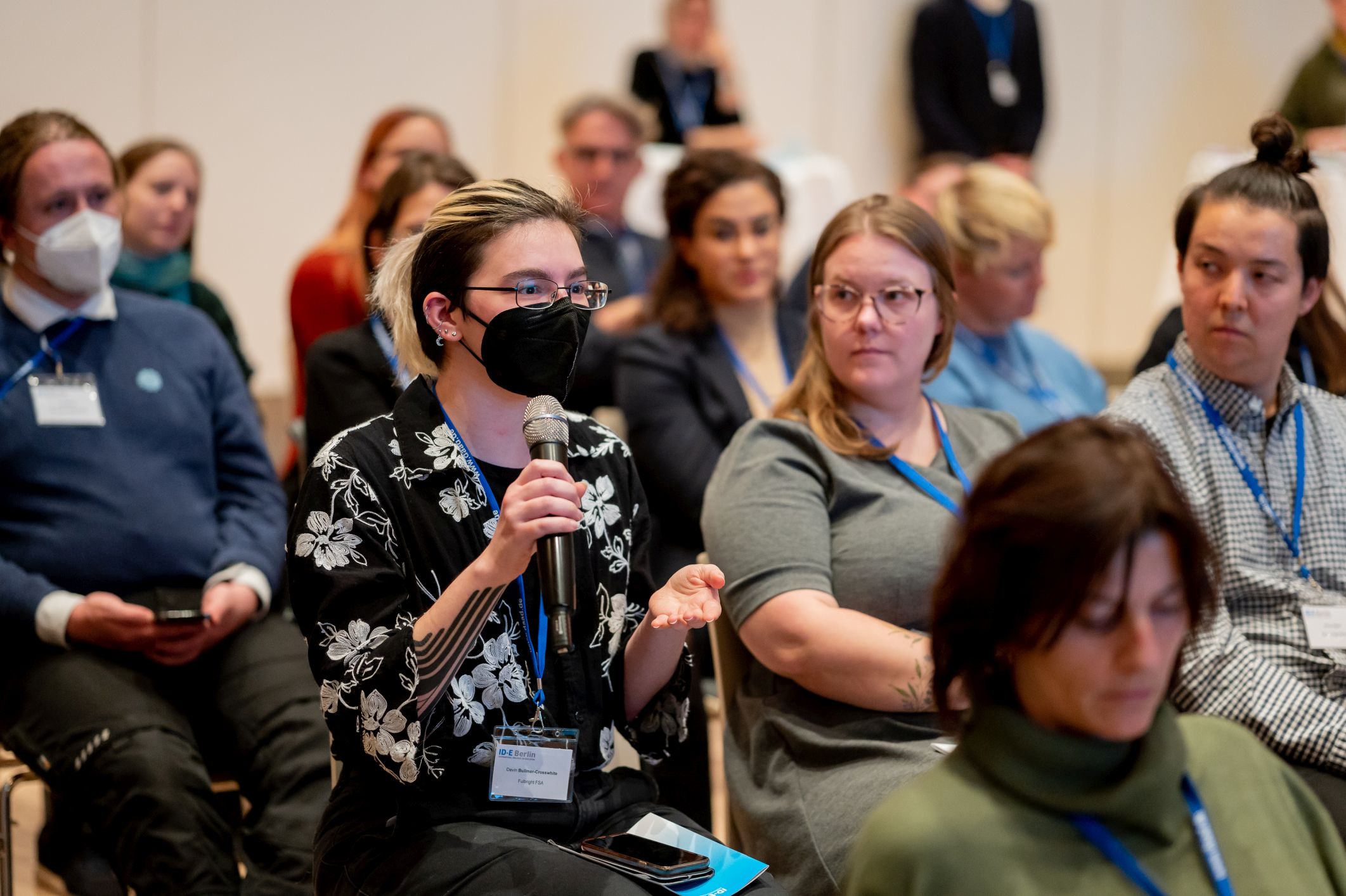 The University of Montreal has also tried to foster a sense of belonging in students by providing funding for student groups to lead peer activities.

Another place where students can build connections is within the classroom. VanDerZanden emphasized that, with the pandemic taking away crucial social development time for incoming students, students are still learning how to build relationships with new classmates. For this reason, Iowa State has encouraged faculty members to demonstrate this skill by engaging students in small talk conversations at the beginning of class.

Baumeister pointed out that teaching students how to improve mental health through mindfulness practices and physical exercise can be another effective preventative measure, and one that he has found is generally more well-received by students.

“One experience from our study is that labeling counts. If we [use] positive psychology— improving your mental health, instead of dealing with your issues— it is far more accepted by students,” he explained.

Overall, the panelists agreed that universities must derive any strategy for fostering mental health from listening to students themselves. Winter warned that with increased funding for mental health resources, universities should make sure not to infantilize students via a top-down approach to mental health services, but rather empower students by providing services informed by students’ articulated needs.

VanDerZanden emphasized that listening to students is especially important as student bodies become more diverse, and people of different backgrounds with different lived experiences navigate what have been historically white and wealthy institutions.

“We are doing work with our international students, with our other students who are coming to our institution from different cultures, different lived experiences, and trying to be sensitive to how we are developing resources to support them,” she said. “Listening to our students has helped us develop quality programs that are supporting them and meeting their needs.” 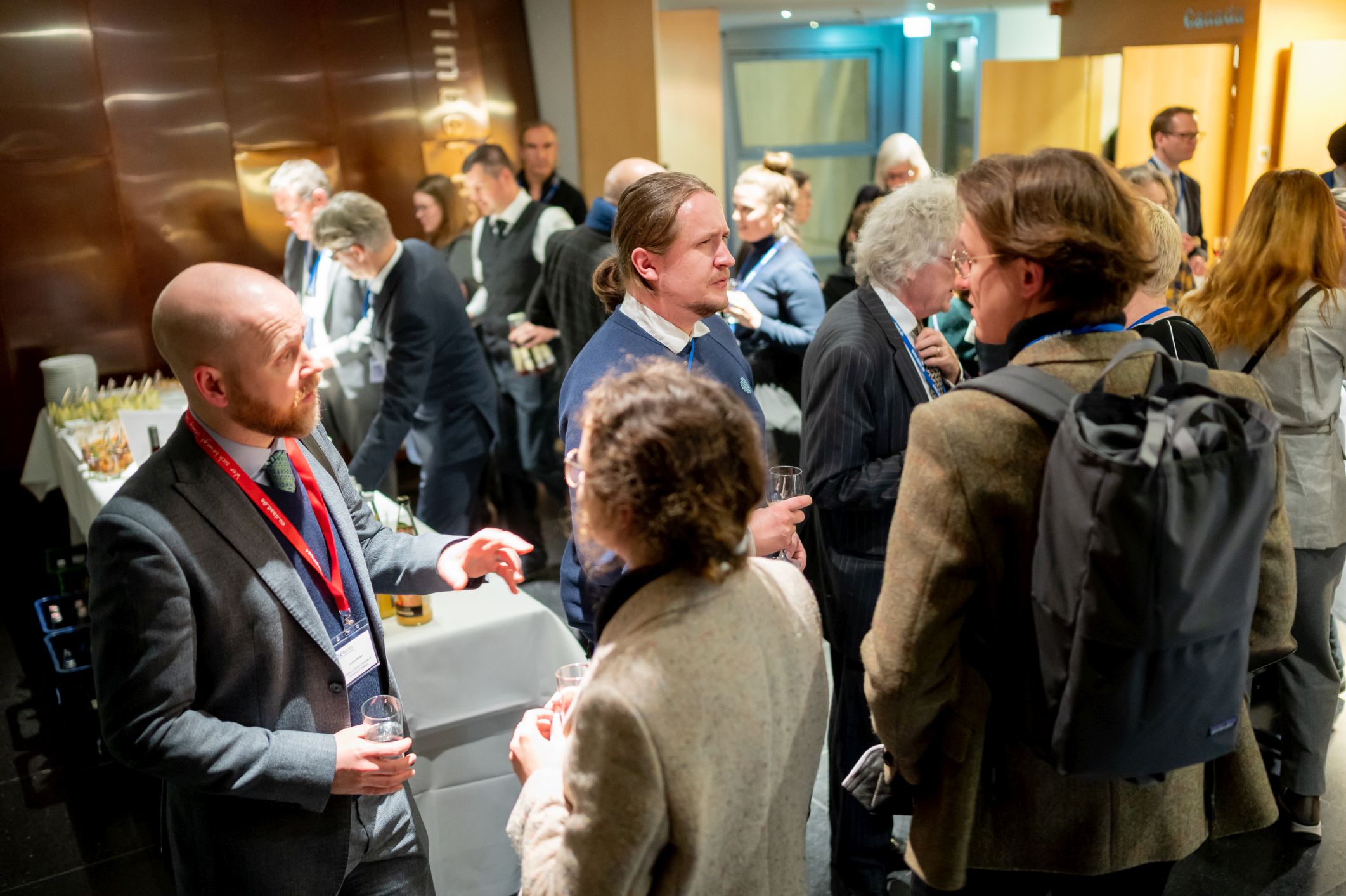 The future of student mental health beyond the pandemic

Although much of the panel’s discussion focused on mental health during the pandemic, the panelists also noted that student mental health had been in decline even before the challenges covid brought. The question-and-answer session at the conclusion of the panel sparked a more robust discussion on this issue, as multiple audience members asked how students were coping mentally with other stressors facing their generation, such as global conflicts and the climate crisis.

In response, the panelists emphasized the importance of building resilience in students, and giving them a sense of control over their lives. Pharand explained that at the University of Montreal, they are employing strategies to help students in this sense.

“One thing that we started to work on during the pandemic is [developing] this resilience in students so that they are able to be less anxious or stressed by those outside conditions over which they have no control, whether it is the climate or the war in Europe,” she said. “It’s early on in the process, but we have put in a lot of energy in trying to help those students become more resilient. We will know in the long run if it makes a difference, but we need to address it, that is for sure.”

Overall, the event emphasized that the student mental health crisis is an enduring worldwide phenomenon that requires proactive and innovative strategies to address. While no country has found the perfect model to address this crisis, Germany can take many lessons from its peer institutions in Canada, the UK, and the United States.